The second day of the Tour de France in the beautiful Vosges includes some of the towns and villages which suffered terrible destruction in the Great War. It climbs to altitudes where domination was vital for observation and defence in the challenging conditions of mountain warfare.

Two postcards, one showing the famous Hotel de Ville and the other the Monument aux Morts (posted 1930).

Behind l’hôtel de la Régence is an intriguing war memorial commemorating Ensisheim 1675 – 1975. It depicts Turenne’s victory at Turckheim in 1675, saving Alsace from the Imperial army, and the American troops who liberated Alsace and the village in 1945. There is a plaque recording the names of villagers who were deported to concentration camps. 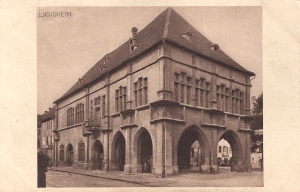 Like many in Alsace, Westhalten’s war memorial depicts the mourning of woman and children. 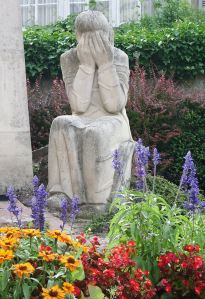 La Cimetière roumain, Soultzmatt, is the resting place of 678 Romanian soldiers who died in captivity during the Great War in Alsace and Lorraine. 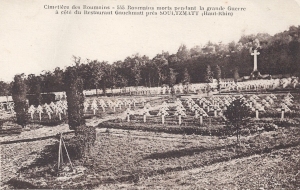 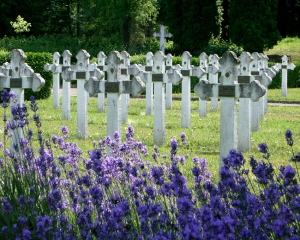 The card below, posted in 1915, shows the town of Munster before the war, looking towards Hohrod and Hohroderg. In the background are the defended observation positions of Hörnleskopf, where vestiges of German structures can still be seen, with Barrenkopf, Kleinkopf and le Linge in the further distance.

Lancaster NN766 crashed into this mountainside on January 7th, 1945. A cross on the hillside commemorates the crew.

A few images showing the destruction of Munster during the Great War:

The civic cemetery in Munster contains the dead of two World Wars and this Bavarian lion, erected by Bavarian troops in 1916. For a fuller account, please visit my other blog:

The Monument aux Morts in Munster before the Second World War:

The camping area in Luttenbach is the site of the château of Coubertin, founder of International Olympic Committee. The château was destroyed in the Great War.

Luttenbach looks across to Reichackerkopf (c  780m), the site of extremely fierce fighting between February and April 1915. It was immensely important, partly because it controlled access to Munster and the two prongs of the valley. 4500 French soldiers and 4000 Germans were killed or lost on this small section.

There are numerous vestiges of the Great War still visible on Reichackerkopf. Many of these settlements in the two valleys were destroyed during the 14-18 war. 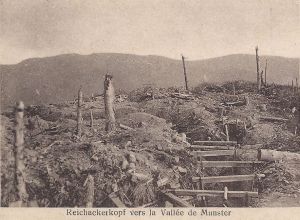 Kahlenwasen is now a peaceful, popular ferme auberge high on the Petit Ballon. During the Great War the farm premises were used by German troops and destroyed. Signs of trench lines are still visible. (The feature picture of this blog was taken from Kahlenwasen.) The second postcard is a military card.

Sondernach after the Great War; and the French cemetery at Sondernach, Cimetière du Bois de Maettle:

After the War, the villages close to Sondernach were left in ruins. 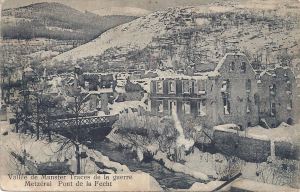 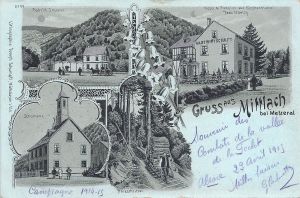 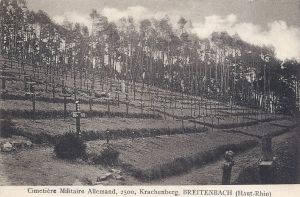 A new church was built on the site of the wrecked Chapelle d’Emm as a memorial to those who died for France in the Vosges, particularly in the bitter battle for Metzeral, June 1915. The principal memorial window is beautiful. 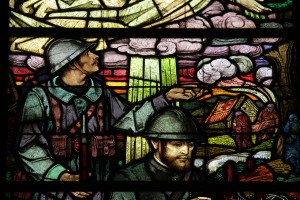 This small, naïve memorial is not far from the road through le Breitfirst (1280m). Its story is self-explanatory from the inscription.

The Col d’Oderen was a frontier point between 1871 and 1914. The original bornes frontières can still be seen. It was also the scene of important action in December 1944. For more information and photos, please see this blog post:
https://thebluelinefrontier.wordpress.com/2014/04/10/two-quiet-cols-oderen-and-bramont/

Finally, to give a flavour of the landscape around Servance, here is a postcard showing movement of equipment on the Ballon de Servance in winter. 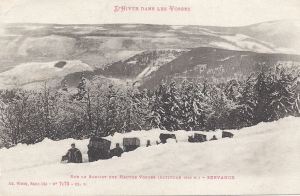 And these two blog posts wouldn’t be complete without …

All postcards and photographs are my own.

My last blog post mentioned the role played by young René Oster working in his parents’ popular auberge at le Moulin de St-Hippolyte. During the Second World War, René was forcibly conscripted into the Wehrmacht, captured by the Russians and died in the prison camp at Tambow.

René was a Malgré-Nous – one of a hundred thousand Alsacien men and thirty thousand men from Moselle who were conscripted against their will into the Wehrmacht or the Waffen-SS after the forcible annexation of France in 1940 and compelled to fight against their country. (In a significant difference from the annexation of 1870, Alsace and Moselle remained legally French in 1940.) Malgré-Nous means ‘in spite of ourselves’. The majority who died in prison camps died in terrible, degrading conditions and near-starvation at Tambow. The fate of the Malgré-Nous is outside the scope of this blog, but there is considerable information available online, particularly at the excellent site http://www.malgre-nous.eu/ The list of names and their fates is harrowing and desolate.

By way of acknowledgement of the life of the young man who grew up at le Moulin de St-Hippolyte, I want simply to share the memorial to the Malgré-Nous at Ribeauvillé, Haut-Rhin. 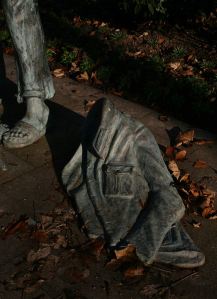 Inscription on the memorial

Location of the memorial

It’s the turn of the century. It’s a summer Sunday in Alsace: there are hours of warm sun to enjoy and friends to meet. Where better for an excursion than St Pilter Mühle, le Moulin de St-Hippolyte? A relaxed six km walk from St-Hippolyte, within an easy stroll from the station, the popular “Brüachmuehl” is a favourite rendezvous for local villagers and the townspeople of Sélestat.

The auberge of le Moulin de St-Hippolyte was run by Daniel Oster, succeeded by his son Emile Oster, his wife and their son René. It was situated in the area of small waterways which feed into the river Ill on the fertile plain at the foot of the wine growing corridor. The ancient mill buildings included stables, a barn and an auberge surrounding a courtyard where tables and chairs were always set out. Every Sunday, pleasure-seekers descended on the auberge, gathering with their friends to eat, drink and relax. The cold water of the mill channel was clear enough to swim in and some visitors from Sélestat even arrived by boat. While Madame Oster and René brought out bottles of wine and kept glasses topped up, Emile played his accordion. Some people sang, some danced and the beer flowed liberally. Madame apparently kept the happy crowds in order!

It wasn’t only a summer destination. When the waterways and pools froze, Sunday skaters enjoyed heading for le Moulin where they could revitalise themselves with Madame Oster’s vin chaud. It was a venue for all seasons.

Nor was its purpose simply pleasure. Harvesting on the ried (the plain) was tough work under the relentless summer sun. During the heyday of manual agriculture, before full mechanisation, farm labourers spent long, exhausting days harvesting an area with little natural shelter. Le Moulin provided essential refreshment, some shade and a place where horses and working cattle plagued by horseflies could shelter, rest and drink.

In the bitter winter, the lumberjacks from the Sélestat area arrived to deal with the huge trunks cut from the frozen forests. They used small horses which had exceptional endurance and transported the trunks by wagon to the station of St-Hippolyte where they were despatched up and down the Rhine valley. These workers lodged in the barn of the auberge close to the stables where their little horses rested.

The happy times at “Brüachmuehl” ended forever in 1944. After American troops liberated St-Hippolyte, the Germans defended the plain areas. Emile Oster and his wife sheltered for a few days with a friend’s parents, but, anxious about their livestock, returned to their home. American artillery bombardment entirely destroyed the Moulin de St-Hippolyte, which burned to the ground and Emile and Madame Oster perished with their property. René Oster, their only child, had been forcibly conscripted into the Wehrmacht and captured by the Russians. He had already died in the POW camp of Tambov. 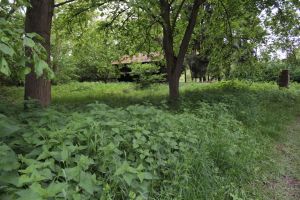 … is what remains of that joyful era. A few stones, part of a pillar, an ancient fruit tree, some burned tiles, some bricks, all now entwined with brambles and weeds. The mill river is overgrown with weeds. If you pause silently and contemplate, you can just about imagine the pleasure of the languid brook, the cobbled courtyard, the dappled shade and the warm sunsets. The atmosphere is charged, still, apprehensive. You might not wish to linger.

Please continue to the next blog post: Un Malgré-Nous: the bleak ending 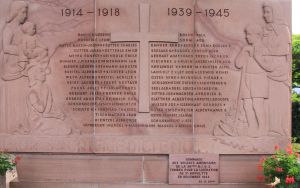 How to find the site

Travelling north along the RN 83 from Ribeauvillé, leave in the direction of Sélestat at junction 18. Very soon on your right you come to a ruined former hotel surrounded by trees and undergrowth. Immediately next to this is a small track which takes you to the Léonhart gravel pit. You will soon pass the memorial to Lancaster ND-781 on your left. Park near the gravel pit. Walk straight along the path (with fields on your left) and after about five minutes you will come to the site of St-Pilter Mühle, le Moulin de St-Hippolyte.

Alternatively, after you have parked, you can follow the marked trail Sentier d’interprétation Ried Paysan which shows how the landscape has been exploited and preserved, and the impact of human activity on the ecosystem. This takes under two hours at a relaxed pace and you’re sure to see wildlife.

Les Cigognes, Bulletin Communal de St-Hippolyte, number 13, 1989, the recollections of Antoine Heyberger whose parents sheltered the Osters during the battle.
Postcards and photographs my own.

On the former French side of the Col du Bussang a small stream emerges from an insignificant hole in the hillside. It is distinguished only by the shape sculpted around it: an M shape which could represent mountains…

… or indicate the name of the river. An elegant design set into the adjacent wall informs you that this is the source of the Moselle at 715 m and a map traces the route through France and Germany (where it becomes the Mosel) to Koblenz, where it flows grandly into the Rhine, 550 km from its insignificant source.

Now the main road N66 races through the Col, taking heavy traffic through the Vosges between Thann and Remiremont on dual carriageways and viaducts. About a kilometre onwards from the Col, a traveller in the time of Reichsland Elsaß-Lothringen would be able to see the bridge over le Séchenat, a tributary of the Moselle. In these two postcards, horse-drawn traffic is warily crossing the Pont du Séchenat.

In three kilometres or so the road down from the Col flattens out into the valley of Bussang, distantly overlooked by the Ballon d’Alsace* to the south. It then heads on west, under the shadow of the Ballon de Servance.

Looking at the bitter winter climate even lower down from the heights, it’s unsurprising that the military personnel stationed on the Ballon du Servance needed protective clothing. 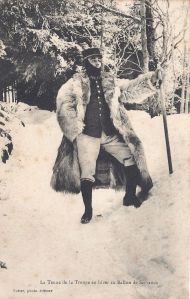 All photographs and postcards are my own.

*Please see other blog posts to read more about the Ballon d’Alsace. 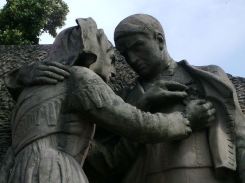 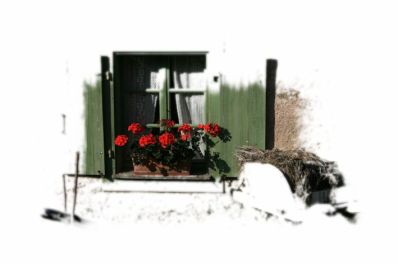 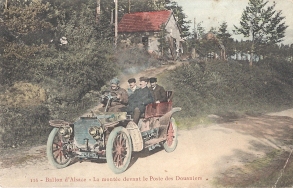 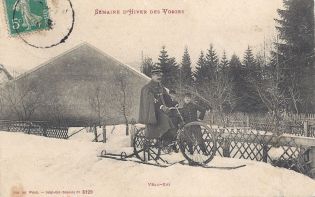 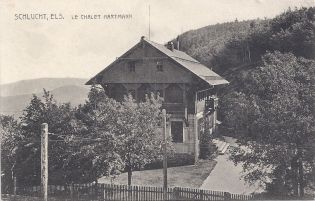 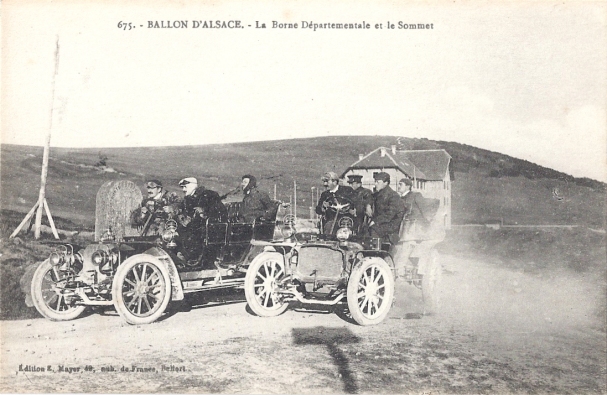